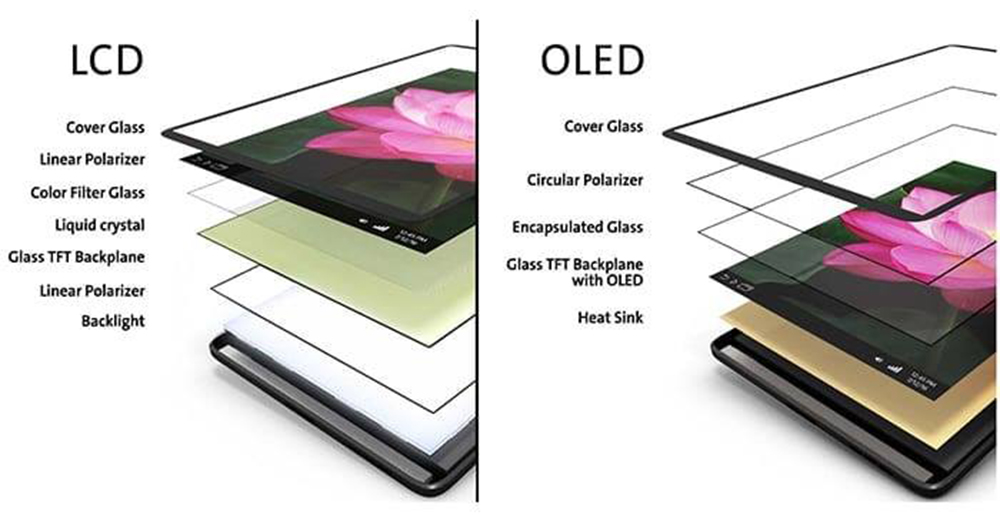 Most phones today use dual display technologies, LCD and OLED. So how are the two different? What are the advantages and disadvantages? Why expensive flagship phones have OLEDs, while mid-range and budget phones have LCDs?What is the difference between LCD and OLED and how does it work? The way LCDs and OLEDs work is quite different. To put it bluntly, the display is made up of a series of dots the size of a pinhead, called ‘pixels’, to display the image we see.

The length of the LCD is a liquid crystal display, and its pixels do not emit light (so-called backlight), so those pixels have to be illuminated from behind. So LCD displays are usually thick. The length of an OLED is the Organic Light Emitting Diod, which emits light to display the image where needed. OLED displays are thin.

LCDs have IPS, LTPS, IPS, TFT, VA, LCD LCDs, but they work the same way.OLD also has different types of OLEDs, PMOLED, AMOLED, TOLED, FOLED, but they work the same way. What are the advantages and disadvantages of both LCD and OLED? Both LCD and OLED are not perfect, but they have their advantages and disadvantages. The advantage of LCD is that it is easy to manufacture and inexpensive. When displaying images, the color is correct. The so-called burn-in is not possible with color/image effects. It is also good for brightness.

The advantage of OLED is that it consumes less power due to lower power consumption. It can produce moisturizing and bright colors as well as natural black called Deep Black. Viewing Angles is good so you can see clearly just by looking at it. As mentioned above, OLED displays are also compatible with the now-popular In-display / Under-display Fingerprint Scanners.

The downside of LCDs is that they tend to have less contrast between the lightest and darkest parts of the display, called the Contrast Ratio. In other words, when black is expressed, it is inconspicuous to describe real black. It consumes a lot of power because of the way it works. The disadvantages of OLED are that it is expensive because it requires organic materials to produce it. Over time, there is a higher risk of color-image burn-in.